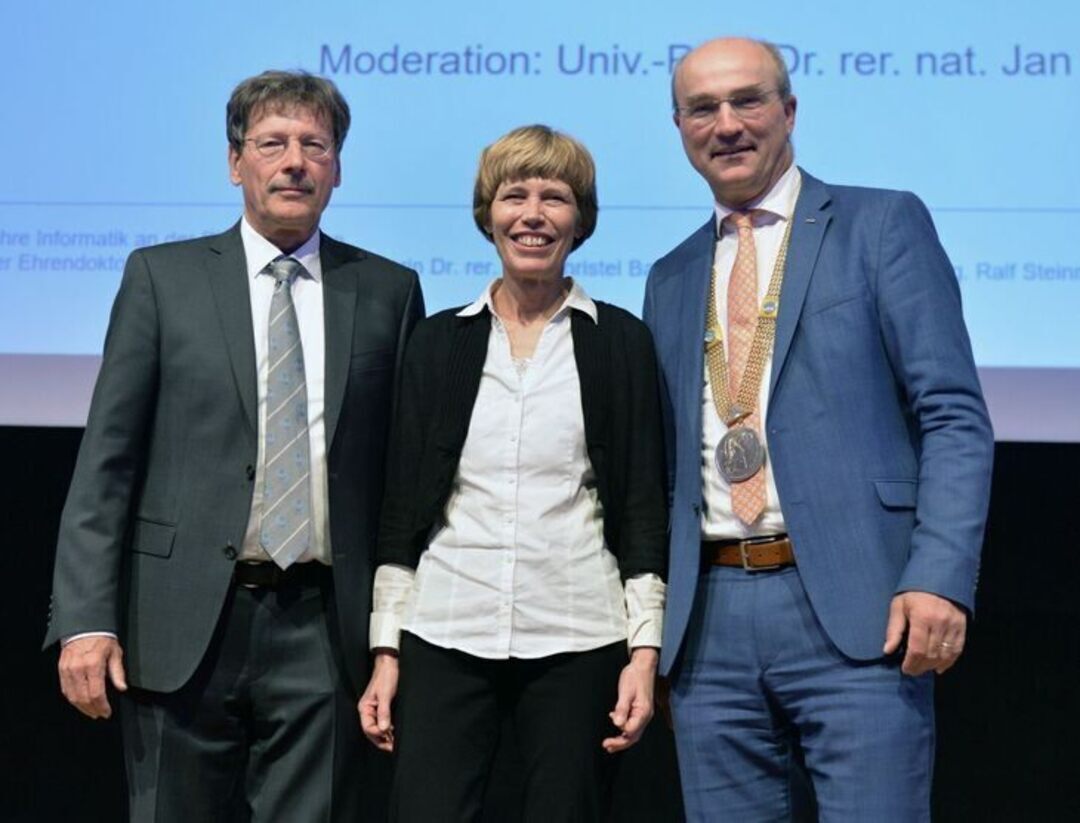 RWTH Rector Ulrich Rüdiger awarded Christel Baier and Ralf Steinmetz the academic degree and title of "Honorary Doctor of Natural Sciences". The award ceremony took place as part of the celebrations held on the occasion of the fiftieth anniversary of the Computer Science department at RWTH Aachen University.

Christel Baier, who has been Chair of Algebraic and Logical Foundations of Computer Science at TU Dresden since 2006, is one of the leading researchers worldwide in the area of formal methods. Under the term of Model Checking, the computer scientist has combined system models with concepts of logic, automata theory, and graph theory. The approach serves to verify whether a computer system meets the requirements in terms of security and performance.

In the 1990s, the RWTH honorary doctor was already doing pioneering work in a field of research that is known today as probabilistic model checking, or PMC for short. PMC describes the behavior of systems and their environments by probabilities, a methodology that helps detect failure of hardware components, wear and tear of machines, or climate-related influences.

Baier has maintained close ties with RWTH’s computer science department for many years. For example, she has co-authored more than 20 scientific papers with RWTH Professor Joost-Pieter Katoen, head of the Software Modeling and Verification Group, and their joint publication Principles of Model Checking is a standard textbook worldwide.

With Ralf Steinmetz, RWTH honors one of the pioneers in multimedia communication. As early as at the beginning of the 1990s, he was researching the synchronization of multimedia data streams with the aim of supporting the design of communication systems. With his work on peer-to-peer technology, the head of the Multimedia Communications Lab at TU Darmstadt also laid the foundations for today's media libraries and streaming services. It was in this context that he coined the widely used term “transition” for distributed and communicating systems. His vision is the seamless exchange of mechanisms in communication: The user does not decide whether to use telephone, messenger, or email, but just sends a message and let the system choose the best way.

Steinmetz has many ties with Aachen, and he is a member of the advisory board of the Fraunhofer Institute for Applied Information Technology FIT. In this role, he has advocated close collaboration between with RWTH and Fraunhofer FIT. Together with Professor Klaus Wehrle from the Chair of Communication and Distributed Systems at RWTH, he published one of the best-known books on peer-to-peer systems and applications.