You Are Here: Strong Finish Ends with World Champion Title for Carologistics after an Exhausting Season 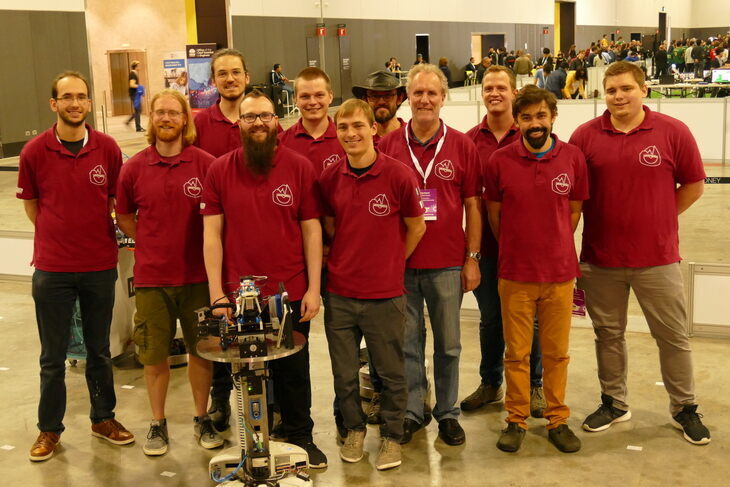 On July 7, Carologistics was able to win the Grand Final with a score of 192:109 points against GRIPS from TU Graz. The thrilling final, which concluded an exciting RoboCup 2019, ended with triumphant shouts by the Carologistics team.

The team, consisting of students and scientific staff from the Knowledge-Based Systems Group (RWTH Aachen University) and the Institute for Mobile Autonomous Systems and Cognitive Robotics (FH Aachen, University of Applied Sciences), wins their 5th World Championship of the RoboCup Logistics League. This year‘s RoboCup was held July 2-8 in Sydney, Australia.

With both competitive and research aspects, the RoboCup Logistics League aims to demonstrate the possibilites of a Smart Factory. With the concept of „Industry 4.0“ in mind, production steps have to be divided into actions executable by robots, thus making their automation possible. These actions have to be planned and coordinated fully autonomously by the robots.

Prior to RoboCup 2019, Carologistics was already able to win the German Open held in Magdeburg earlier this year. Their success put them on a steep upward trajectory towards the world championship. Coming in 3rd Place and having to deal with technical issues at last year‘s RoboCup had left some marks on the team members. These marks came to show again after a small mistake in a playoff game against BabyTigers from Japan, which rendered the robots useless for the rest of the game. The resulting tension was finally lifted after the flashing of the red lights of the MPS stations when the final game against GRIPS ended. Now it was official: the trophy is coming home!

Apart from the games, a technical challenge is part of the RoboCup Logistics League. Being the same challenge as last year, Carologistics was keen on winning the technical challenge as well. They had not been able to compete last year, but wanted to show their competence in recognizing the MPS Stations without attached AR-Tags this year. Image recognition based on neural networks proved to be the winning solution for this challenge.

After a most successful RoboCup 2019 the exhausted but happy team returns home from Sydney with both trophies in hand. After a short break the preparations for the upcoming RoboCup 2020 in Bordeaux will start.