You Are Here: Award for Paper “Springlets” at CHI ’19

Award for Paper “Springlets” at CHI ’19 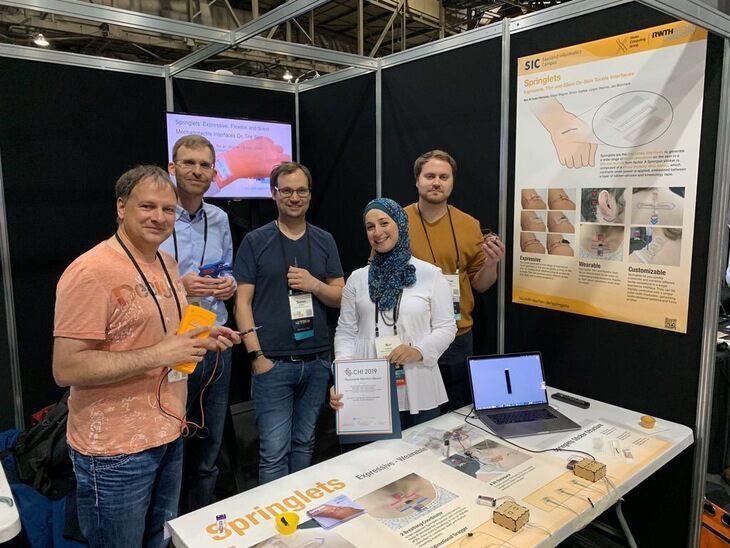 The paper Springlets was published and demonstrated at the ACM CHI Conference on Human Factors in Computing Systems, the premier international conference of Human-Computer Interaction. It received a Best Paper Honorable Mention Award.

Springlets use a single type of actuator, soft and silent shape memory alloy springs (SMAs), to create a wide range of sensations on the skin in a highly wearable and customizable form factor. They use the simple contraction-expansion actuation of SMAs to stretch the skin or move and transform haptic objects on the skin surface. As a result, in our paper, we show how to build Springlets that apply tensile, normal, and tangential forces on the skin, creating sensations such as stretch, press, pull, drag, and expand.

Springlets' soft and thin form factor allows them to be worn on soft and curved body locations, thanks to their silent operation, even near the head. Springlets can be cut into any shape or size, they can be combined in a single interface, and digitally controlled to generate spatial sensations of various force profiles. They may also contain haptic objects of different textures (fluffy or tacky) and shape changing properties.

Unlike vibrotactile output, Springlets provide smooth yet powerful and silent sensations that mimic the natural forces and movements of touch gestures on the skin. This allows for a range of novel applications for mediated social communication, accessible user interfaces, mindful and affective applications, and virtual reality experiences.